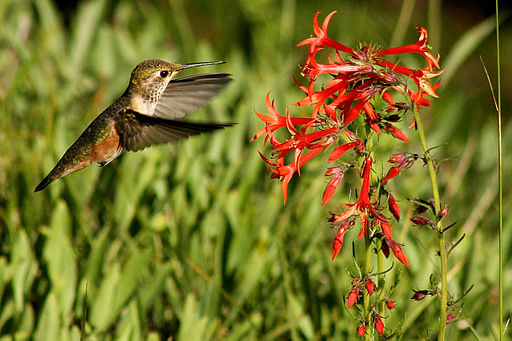 Many years ago, when we were renting a house in a town outside of Seattle, some neighborhood kids came over to ask if they could mow our lawn. They let on that their parents had put them up to it because the grass was getting a bit too long. I knew the benefits of holding back on mowing, but confess to feeling a bit embarrassed. After all, we live in a culture that promotes “neat” lawns as the neighborhood standard. I’m long over the embarrassment and happy to report that more and more people are changing their attitudes, as research documents the benefits of reducing mowing frequency and shrinking our lawns.

There are several drawbacks to lawns, which cover about 50 million acres in the United States. These monocultures (one type of plant) do little to provide habitat or support wildlife. They lack floral resources and structural diversity. Native bees and birds are left with few food choices, little shelter, and a dearth of nesting sites. Lawns require a lot of water, especially problematic in the drought-stricken West. Nitrogen-rich fertilizer is applied in large enough quantities to contaminate groundwater. Pesticides and herbicides may directly harm birds and bees or cause indirect effects, as they kill non-lawn flowers and devastate the insect population and other food resources on which birds and bees rely. The chemical run-off has far flung effects on aquatic ecosystems, contributing to the decline of species like freshwater mussels, which we rely on for water filtration. In addition, most lawn mowers use fuel and contribute to CO2 emissions. Not to mention noise pollution.

Mowing early in the spring reduces pollinator populations. A promising initiative is No Mow May which is being promoted in the US by groups such as the Xerces Society. By avoiding mowing in May, habitat and forage for early season pollinators is protected and greater food abundance is available for nesting birds. In 2020, Appleton, Wisconsin, became the first city in the US to officially adopt No Mow May. A 2022 study examined the effects of No Mow May in Appleton and found that participating yards had three times as many bee species and five times greater abundance (or number) of bees. This effect multiplies when you consider that the protection of these spring-emerging native bees means better pollination for the flowers, which in turn, creates more abundant food resources for birds, other wildlife, and people.

On an agricultural scale, mowing causes mechanical destruction of nests, with one study showing that 25 percent of grassland species’ nests were destroyed by spring mowing. The report determined that a delay in mechanical mowing of just two weeks until early June would have allowed all destroyed nests to have a successful nesting season. Studies have documented indirect effects of mowing during the nesting season as well, mostly due to increased predation on more exposed nests, or nutritional failure from lack of plants (mowed down), and lack of insects.

Cutting back on the frequency of mowing is another effective strategy. An experiment by Lerman et al. (2018) measured the effects when lawns were mowed once a week, once every two weeks, and once every three weeks. Lawns mowed less often had 2.5 times more lawn flowers than lawns mowed once a week and had higher bee abundance. Overall, the researchers documented 111 species of bees using lawn flowers in western Massachusetts.

Less mowing and fewer lawns are practical and economical solutions that allow many of us to directly contribute to the health of pollinators and birds that rely on insects and the plants they pollinate. Please consider not mowing or, possibly, mowing less frequently during the month of May and subsequently, less regularly throughout the season. Reduce or eliminate the use of synthetic chemicals including herbicides, pesticides, and rodenticides. The latter poison owls and other birds of prey. Native plants require much less water, chemicals, and maintenance than turf grass. Replace some existing lawn areas with useful flowering native plants and/or a “bee lawn” that may contain plants such as clovers, violets, and creeping thyme. Together, we can transform our urban and suburban barren landscapes into beneficial habitat for bees, birds, and others.