I can’t imagine hummingbirds not bringing a smile to your face! I hope all of you get a chance to watch them as they flit, dive, fly sideways, hover, and engage in aerial dogfights. Hummingbirds are beautiful, small, fast, tough, and agile. They have prodigious spatial memories, effortlessly remembering the locations of flowers and feeders previously visited. They also serve as important pollinators, many visiting over 1,000 flowers a day to fuel their active behaviors. Depending on the species, they may weigh as little as 0.141of an ounce. Their heart rates clock in at an amazing 500-1200 beats per minute. 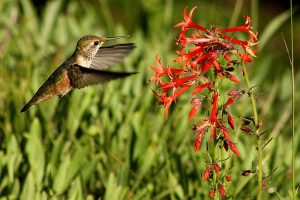 The authors considered possible explanations for the observations based on an analysis of scientific publications. For migratory birds, changes at stopover sites could be key. Researchers believe that one of the repercussions of climate change is to create a mismatch between the timing of plant flowering and hummingbird migration. Other factors include the loss of habitat containing food resources due to an increase in urbanization (and pavement) and invasive species. The birds may further be impacted by widespread exposure to agrochemicals on their breeding grounds. Loss of wintering ground habitat is attributable to logging, agriculture, and urbanization in and south of Mexico. Central American dry forests have suffered anthropogenic disturbance, and loss of habitat is further exacerbated by the frequency and severity of forest fires.

An increase in Anna’s populations was noted across the western US, with most dramatic seen in the northern range of Canada where they were once rare. Eucalyptus trees, which bloom from October to April, though not in the northern part of their range, provide additional nectar. Feeders may well be providing a necessary source of food for these birds throughout their range. Researchers have not yet determined what features of this species allow them to better expand their range into the colder regions of northern North America, while other species impacted by climate change have not or cannot. 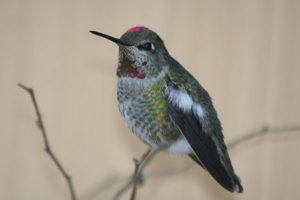 At the federal and state level (as well as in various cities), there is much discussion about climate change legislation. Let your legislators know that meaningful action to slow climate change matters to you and to the hummingbirds.