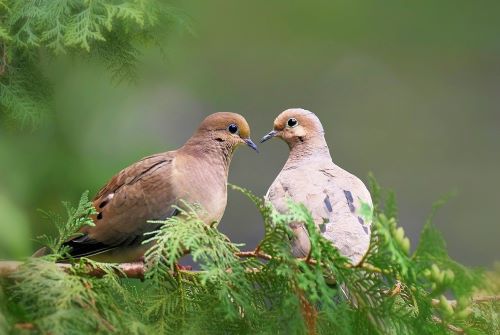 Most of us live in urban or suburban areas where we are treated to the sights and sounds of the birds that share our space. Several researchers have explored the effects of urbanization on birds. Findings differ depending on context, but unfortunately, the data shows that fewer species are able to make a living inside urban areas than outside of them. For those birds that do well in cities, the abundance or numbers of birds may be higher than in surrounding areas.

Many factors influence which birds are found in greater numbers within cities and their suburbs. Birds that have better tolerated urbanization tend to be prolific breeders and opportunists (like Rock Pigeon, Mourning Dove, and House Finch.) Cities support a greater proportion of cavity-nesters, birds with larger clutch sizes, and those that flock in larger numbers. Omnivores and granivores have a better chance of exploiting human resources, whereas insectivores do not fare as well in cities.

Birds such as White-crowned Sparrows may benefit from the food at our feeders. Some raptors have taken advantage of human-made structures to find good places to nest within cities. If food sources are available, such as fish for osprey, they fare well in the city and may suffer less persecution than in rural areas. One study showed that bigger-brained species (relative to their body size), such as American Crows, Black-capped Chickadees, and American Kestrels, also prosper better in cities. 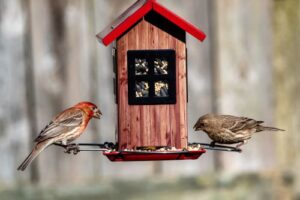 Birds in cities must contend with reduced habitat and habitat fragmentation, poor nutrition, higher levels of pollutants, pesticides and plastics, increased predation from cats and other introduced animals, noise pollution, lights pollution, increased risk of collisions with buildings and powerlines and cars, and the stress of constant proximity to people.

Studies have uncovered some of the repercussions. Artificial light and noise have been shown to negatively affect parental care and other behaviors. Noise makes it more difficult for birds to communicate and less likely to achieve predator avoidance. Birds that live in cities start singing earlier in the spring and will sing for a longer period through the season. The characteristics of their song may differ with a shift to higher-frequency songs, which can presumably be better heard over the low-frequency rumble of traffic and other urban acoustical features.

One study noted a larger bursa of Fabricius in city birds relative to rural birds. This is a specialized organ in birds that allows them to mount a stronger immune response. Another report measured significantly shorter chromosomal telomeres, which are associated with shorter lifespans. Some studies have reported lower fledgling rates for certain species and a decrease in egg size.

In Europe, researchers have noted that dark morphs in pigeons are more common in cities. Melanized feathers help detoxify the blood stream from heavy metals. Nutritional deficiencies have been noted, including less carotenoids in food sources. For example, there is a lower abundance of caterpillars, a good source of carotenoids, likely due to higher pollution levels and fewer native tree species. The decrease in carotenoids may affect mate choice and breeding success. Some city species need to expend greater amounts of energy to maintain larger territories in order to get the resources they need. Higher levels of territorial aggression have also been observed than in their rural counterparts.

How We Can Help Our Feathered Neighbors

About 20 percent of bird species worldwide manage to make a living in cities. This provides a community opportunity to help them. How can we better share our urban neighborhoods?
–Lobby your representatives to preserve green spaces in the city and to plant more city trees.
–Request that city planners take birds, and especially, nesting areas into account when planning new roads. Sound barriers and even improved surfaces on roads can help.
–Keep cats indoors or under supervision (for cat safety as well as wildlife).
–Urge decision makers to use bird-safe glass in building projects.
–Use window deterrents at home; suggestions at abcbirds.org/glass-collisions/stop-birds-hitting-windows/
–Be sure exterior lights are shielded, not overly bright, and minimize the amount of blue spectrum light. Here’s a source for bird-friendly lights: darksky.org/our-work/lighting/lighting-for-industry/fsa/fsa-products/
–Use curtains/shades during migration to reduce light spill.
–Use less plastic and less pesticides.
–Plant native vegetation and use bird-friendly garden practices (tips on page 4 of the July-August 2022 issue of The Quail).
–Keep your bird feeders clean and enjoy the birds!