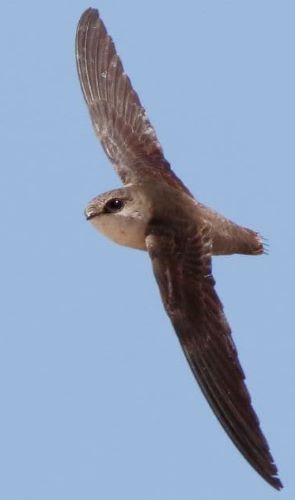 Vaux’s Swifts (Chaetua vauxi) are small aerialist insectivore birds. They do not perch to rest, as songbirds do, but spend their entire day on the wing. They are long-distance migrators from Central America to the Pacific Northwest (PNW) in the spring (mid-April to mid-May), where they then nest in the forested areas as far north as British Columbia. 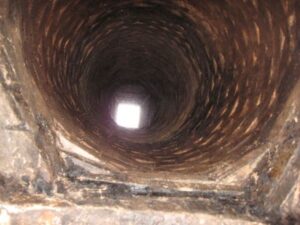 When they first arrive in the PNW they use chimney roost sites to rest and regain their strength before continuing into the surrounding forests and further north to set up nests. These birds eat thousands of insects every day! At the end of their summer breeding season, they gather again into migrating flocks and use the chimneys in the fall, as they prepare for the south-bound migration. In the winter they reside primarily in Mexico and Central America.

It’s important to note that the Vaux’s Swifts haven’t always had brick chimneys to roost in at night along the Pacific Flyway. Originally, they used the hollowed-out spaces in dead trees — and many still do this. But as much of this habitat has disappeared, the birds have adapted. These birds also use rock crevasses with vertical openings in the western mountains as roost and nest sites. Old brick chimneys, however, have become critical to the migration survival of these birds. The structures are unique in their ability to provide a safe spot for sleeping swifts. The birds’ small claws cling onto the rows of mortar that hold the bricks together. Sadly, due to the age of some of these chimneys, many are under threat of being torn down or have been capped. These human-built roost sites protect the vulnerable resting birds from predators and low nighttime temperatures, which they cannot survive. 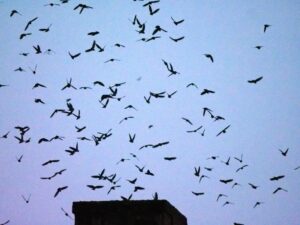 The Agate Hall Chimney on the UO campus has been a major nighttime migration roosting site for these swifts for almost 40 years! It is an ecologically significant migratory stopover for thousands of Vaux’s Swifts during the spring and fall migrations! The swifts’ use of the Agate Hall Chimney has been observed and reported for only a few nights each migration and yet it is one of the top chimneys used by migrating Vaux’s Swifts in the PNW. Lane County Audubon Society (LCAS) has been sponsoring a viewing event (“Welcome Back Swifts”) two or three nights during each migration for 22 years. During last fall’s migration 37,779 Vaux’s Swifts were counted entering the chimney over 12 evenings. The number is not a total of the birds that may have used it. If we had volunteers do daily counts, the numbers could be higher!

For the last 12 years Larry Schwitters, a Washington resident, has been organizing and compiling the use of major roosting sites and several lesser sites in California, Oregon, and Washington for Vaux’s Swifts during their spring and fall migrations. This effort has grown over the years, and the results can be viewed at: vauxhappening.org/

Built in the 1920s, Agate Hall is already designated as an historical structure. After the Agate Hall Chimney was deactivated for use as a building heating system, the University of Oregon installed straps and earthquake mitigation supports on the chimney. In fall 2013, they cleaned out the interior in order to assess and maintain the structural integrity of the building. We would like to encourage the UO to also assign Agate Hall Chimney an official status, preserving it as important habitat for the migrating Vaux’s Swifts. 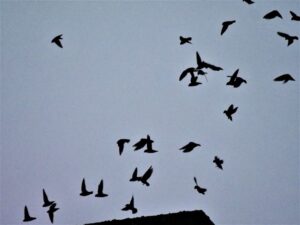 UO’s Agate Hall Chimney is a valuable structure that is under-utilized in terms of educational opportunities and public accolades, which the university community could find beneficial. An educational plaque could be placed outside to inform, educate, and show the ecological value of this structure. Students could use the site to study animal behavior, and learn data analysis techniques, using counts of the Vaux’s Swifts at the chimney during migrations. The University of Oregon could include the Agate Hall Chimney, with Vaux’s Swifts entering, as part of a virtual campus tour! The University can gain public acclaim through these actions and, if needed, could leverage donations for maintaining this structure.

During evenings in the spring and fall, hundreds of people watch this natural spectacle. Vans of birding tourists have this chimney on their wish list to be able to see, hear, and enjoy the swifts entering. Teachers have brought young students and their families to watch these birds entering the chimney. Families with children of all ages come to have ice cream from nearby businesses and watch the swifts. People bring out-of-town visitors to see this amazing natural phenomenon. The swift-watching experience is an important part of our local community life.

LCAS would like to propose a formal adoption of the Agate Hall Chimney as important bird habitat, and to ask the UO to maintain the chimney perpetually, so it can be a dependable migration stopover for the Vaux’s Swifts, and to assure the future enhancement and delight for our human community. If anyone wants to help in this project, we would like your input!

For those of you who have not seen the birds using the chimney, check out this Youtube: youtube.com/watch?v=1TT07lAdNaM

See the calendar to get info on when/where LCAS is hosting in-person, real-time spring viewings.

From Our President: Thank Yous

Lane Audubon sends a very big Thank You to Kathy Wilson, who for the past…

We Are Grateful to Our Many Supporters

From Our Treasurer: The World of Birding

From my veranda, I watch in amazement as Anna’s Hummingbirds hover, then flit from blossom…