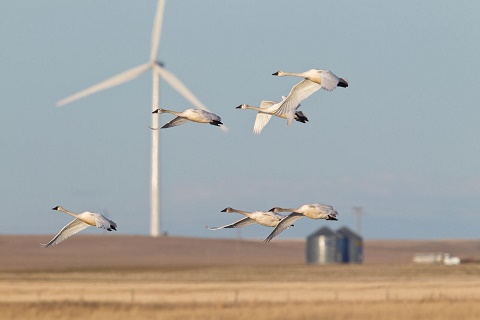 The American Bird Conservancy, a non-profit national organization, is dedicated to conserving wild birds and their habitats throughout the Americas and has been working for years on efforts to reduce threats to bird populations.

One of their project areas has been to reduce the negative impacts of large-scale wind energy development on birds. Wind energy and birds can co-exist, but only if turbines are sited properly. The United States is now the world’s leading producer of wind energy, with tens of thousands of wind turbines in operation and many more planned. As a result, bird mortality from collisions is escalating every year, especially in areas where turbines and their associated power lines and towers have been poorly sited from the perspective of bird conservation.

ABC has recently teamed up with two other non-profits to promote the development of distributed solar electric energy installations on homes nationwide. Distributed solar electric energy production can be a significant contributor to reducing reliance on fossil fuels and can be much less harmful to birds. An additional benefit to their joint efforts is to assure that underserved and minority communities are included and that the efforts are truly in every state and community. You can find more information including how solar energy can change communities at 30millionsolarhomes.org/ and how to make rooftop solar the cornerstone of a modern clean energy system at solarunitedneighbors.org/
— Jim G Maloney