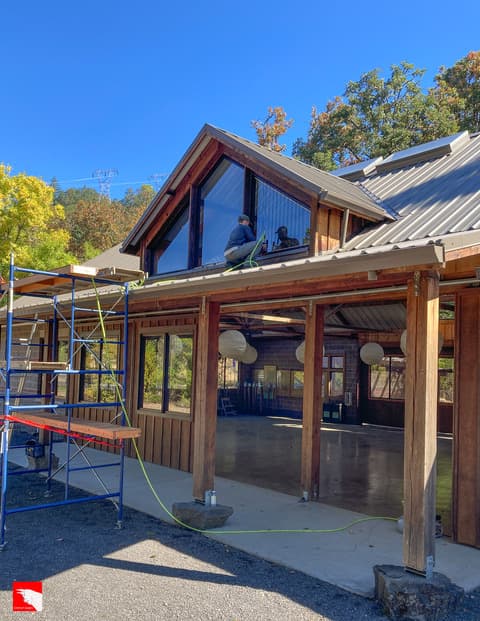 Birds face a myriad of threats as they go about their daily lives. In addition to the natural causes of death like disease and predation, there are a host of causes that are human influenced. Habitat loss, cats, pesticide use, and collisions with buildings/windows are among the top factors. One of the most recent estimates of bird fatalities caused by collisions with buildings/windows in the United States is based on an analysis of 23 studies prepared by researchers at the Migratory Bird Center of the Smithsonian and the US Fish & Wildlife Service: bioone.org/journals/the-condor/volume-116/issue-1/CONDOR-13-090.1/Birdbuilding-collisions-in-the-United-States–Estimates-of-annual/10.1650/CONDOR-13-090.1.full. They estimate that between 365 million and 988 million birds (median = 599 million) are killed annually by building collisions in the U.S. Most of those fatalities happen at homes and buildings shorter than four stories tall. Even glass walkways and bus-stop shelters cause bird collisions. Most of those collision fatalities are related to windows and not to the building structures themselves.

So why do birds fly into windows? Again, researchers point out that birds, like people, do not “see” glass. But unlike birds, people learn over time from experience and other visual cues that what we perceive is either a reflection of the scene behind us or that the glass is a barrier to what is seen behind it. Birds see reflections in glass as open space or habitat and fly directly into it. Portland Audubon estimates that 54 to 76 percent of those collisions are fatal: (audubonportland.org/our-work/rehabilitate-wildlife/being-a-good-wildlife-neighbor/birds-and-windows/.)

Most of us have had bird collisions at our homes. They often go unnoticed. Unless we find a bird on the ground, hear an ominous thud from a window, or see a feather powder smudge mark on our window, we are unaware of the collision.

We can make our homes and buildings safer for birds. The American Bird Conservancy has created a comprehensive website with information on how to reduce bird-window collisions and what kinds of products are available to accomplish that task.

Mount Pisgah Arboretum is a 209-acre nature education facility where visitors can explore the ecology of the southern Willamette Valley. One of the well-known structures at the Arboretum is the White-Oak Pavilion. It is used during various nature-related festivals and training activities, as well as being a popular venue for weddings and memorial services.

The current building replaced an old Quonset-hut-type structure in 2005. Designed by Fred Tepfer, John Reynolds, and Richard Shields, with input from Arboretum staff and members, it was intended to be visually and physically open to the natural surroundings. The expansive window areas, while visually connecting with the surroundings, can and have proven fatal to many birds over the years.

In the past, Arboretum staff made efforts to reduce the number of collisions by applying ultraviolet reflecting stickers to the outside of the windows, with mixed success.

Over the years visitors and staff continued to make note of the occasional discovery of birds around the outside of the building. Interest was building to address the problem in a more substantial and effective way. In August, Lane County Audubon reached out to Arboretum staff with an offer to assist in the design and implementation of a retrofit bird collision deterrent system to reduce the number of fatalities.

After consultation and discussion of alternative approaches, Arboretum staff decided on an adaptation of an approach utilizing nylon cords attached to the tops and bottoms of the windows on the exterior. The intent was to have a system that was relatively inexpensive, easy to repair, easy to remove and replace, and visually acceptable.

In September, with the approval of executive director Brad van Appel, Arboretum staff members Connor Reinecke and Patrick Wegner, along with Lane County Audubon volunteers Bryan Ribelin and Jim Maloney, began the fabrication and installation of the system. Beginning on the ground level, the system was installed on the 36 rectangular windows that were easily reachable before moving on to the more challenging upper windows.

In all, 48 windows received the application of the deterrent system, consisting of Velcro-attached wooden strips at the top and bottom, to which were stapled .25-inch nylon cords. Approximately 400 linear feet of stained oak wood strips and some 2,300 feet of nylon cord were used.

The visual impact to the architecture of the pavilion seems minimal and, viewed from the inside, the black cords at 3.5-inch spacing do not dramatically affect the outward views. During installation, a number of visitors stopped by and commented on how little they detracted from the building, if at all. While visually giving birds a cue that there is an obstruction, the dark oak wood and vertical nature of the cording is in accordance with the building’s architectural style.

Arboretum staff and visitors will continue to monitor for bird fatalities, for how well the system stands up to weather, and how easy it is to repair, but for now there is optimism that collisions will be diminished significantly.