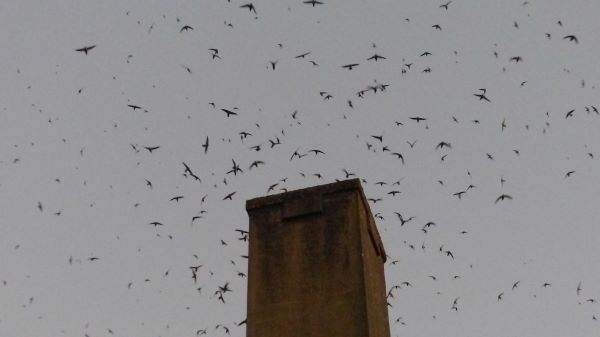 KLCC’s Tiffany Eckert interviewed Lane Co Audubon President Maeve Sowles as they witnessed a natural phenomenon in Eugene while a large flock of Vaux’s Swifts gathered at sunset and dove into a chimney at Agate Hall on the UO campus.

Twice a year, Vaux’s Swifts migrate through the Willamette Valley. The little birds fly non-stop all day, gobbling up insects. When it’s time to roost for the night, they head to dismantled brick chimneys for warmth and safety. Thousands fill the sky, circling and chirping- before diving in. The phenomenon happens twice a year in Eugene.

It’s fall migration for the Vaux’s Swifts. These birds summered in Canada and now they are heading south to Mexico and beyond, with their offspring. One of their stops is here– Agate Hall chimney on the University of Oregon campus. It’s the second largest roosting site in the state, after Chapman School chimney in Portland.

“Typically, they’ll wait to enter the chimney until after sunset.” Maeve Sowles is President of the Audubon Society of Lane County and she’s watched the dance of the swifts for decades. “They do just practically materialize out of thin air,” she said. “Because they might fly up super high and then drop down. Almost like a swarm,” she said. …

Listen to the full story on KLCC.