Fighting Crime with Feathers: The Casebook of a Forensic Ornithologist 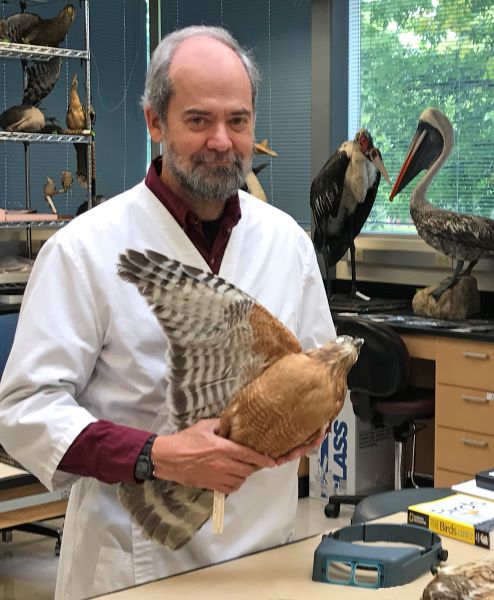 This program is available for viewing on YouTube: Fighting Crime with Feathers.

Have you ever wondered what happened when you see a pile of feathers along the trail? Perhaps a crime has been committed! To solve cases like this, what you need is a forensic ornithologist. Pepper Trail is that guy. “I have a strange job – I identify the victims of wildlife crime when the victim is a bird,” he says. “I’m one of only two people in the world who do this.” His presentation will shed some light on how he goes about unraveling these feathery mysteries.

Pepper’s interest in birds began early. By age 10 he had already started his life list. Now he is soon to retire from his job as the senior forensic scientist in ornithology at the U.S. Fish and Wildlife Service National Fish and Wildlife Forensics Laboratory in Ashland, Oregon. In this position, he identifies bird species from evidence obtained in connection with criminal investigations by federal Special Agents, Wildlife Inspectors, and state and international wildlife agencies. He has completed more than 2,000 requests for analysis, involving over 80,000 identifications of bird parts belonging to more than 900 different species. This work has included all the evidence types that are examined in forensic ornithology: live birds, whole and partial carcasses, individual feathers, crafted items, bones, and bird remains from oil pits and spills. In recognition of his experience and expertise, he has been certified as a Wildlife Forensic Scientist by the Society for Wildlife Forensic Science since 2014, when their certification program began.

He earned a bachelor’s degree in biology from Cornell University, a master’s degree from the University of California at Davis, and returned to Cornell for a Ph.D. in ornithology. In his post-doctoral research he studied behavior, zoogeography, and taxonomy of the three Panamanian forms of Thrush-like Manakin, a primitive passerine of uncertain affinities. In Surinam he studied the operation of sexual selection in a sexually monomorphic lek-breeding species, the Capuchinbird. Another focus was a study of the food storage behavior and communal breeding of Acorn Woodpeckers in the Chiricahua Mountains of Arizona. He is also an accomplished poet and published author, and has been known to channel his inner explorer by performing in the persona of Charles Darwin for local clubs and events.

Help us continue our educational programs and our work in protecting birds, other wildlife, and their habitat in Lane County by becoming a member, or donating today.
Become a Member!
Copyright 2022 © Lane County Audubon Society | Website developed by Partnered Solutions IT | Designed by Ruby Porter Marketing & Design