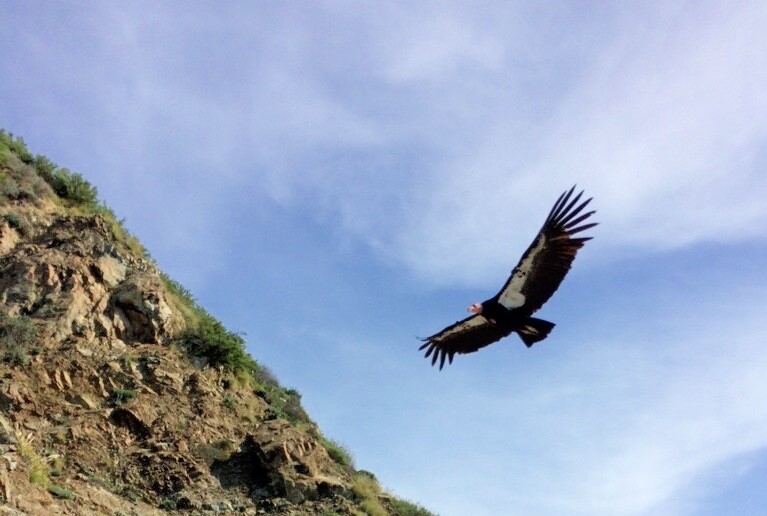 What’s the largest native bird in North American? That’s easy. With a wingspan of nearly 10 feet, California Condors (CACO) win the prize. Soaring above the landscape, they use their keen eyesight to search for carrion and provide important “clean-up” services to the environment. It’s been about 100 years since these magnificent birds flew in Oregon skies, but I’m happy to report that this is about to change. The Yurok Tribe has worked for decades to bring back this sacred bird, called “pregoneesh” in the Yurok language. A partnership between the Yurok tribe, the US Fish and Wildlife Service, and the National Park Service is establishing a population of CACOs in Redwood National Park in Northern California. With a flight range of up to 150 miles per day, these birds will soon be flying in Oregon again.

Once seen over much of North America, the population of these birds plummeted to only 22 individuals by 1987, due to hazards such as hunting, habitat destruction, and lead poisoning. These were rounded up and placed into a captive breeding program. Thanks to a comprehensive recovery program with a focus on careful breeding, mentorship by older birds, and training programs to prepare the birds for release, more than 300 California Condors now live in the wild, ranging over California, Arizona, Utah, and the Baja Peninsula. Nearly 200 more are living in captivity.

Condors can live for 60 years but do not start to reproduce until they are 6-7 years old. They lay only one egg at a time and do not breed every year. The chick learns to fly when it is about 6 months old but will stay with its devoted parents for many more months. Condors are clever, social birds who engage in games like tug of war and fetch the feather. Their preferred habitat is large swaths of relatively remote land containing rocky cliffs, tall trees, and snags for foraging, roosting, and nesting.

As exciting as it is to be able to see the California Condor in Oregon, threats remain for these endangered birds. The population being released in Northern California has been designated a “nonessential experimental population.” This designation exempts most incidental take (or harm) of condors, provided the take is unintentional and not due to negligent conduct. However, some activities are prohibited close to the nest, including habitat alteration, and significant visual or noise disturbance. Activities that reduce wildfire risk are allowed.

How can we help? A good strategy is to identify the threats so we can help raise awareness.

• Lead poisoning. These scavengers suffer lead poisoning when they eat gut piles and carcasses that have been shot with lead ammunition. Raptor rehabilitation centers throughout Oregon document lead poisoning in Bald and Golden Eagles, hawks, and other raptors. Recapture of condors for de-chelation therapy is stressful for the birds, expensive, and often cannot clear enough lead to prevent an agonizing death. California has banned the use of lead-based ammunition. We can too. But until that time, please help spread the word to hunters you may know. Non-lead ammunition has been shown to be as effective as lead ammunition and the cost is now comparable.

• Rodenticides. Rodenticides are slow-acting decoagulants that cause dying animals to wander around in the open in search of water. When hunting raptors or scavengers eat the poisoned rodents (and other non-target animals), they also get poisoned. There are better ways to control rodents. Please let others know. Marijuana production has grown in Northern California and Oregon which, unfortunately, has increased the use of rodenticides. If you are a consumer or know one, please ask dispensaries to urge growers to use other methods.

• Other contaminants. One coastal population in Central California is dealing with thin eggshells and inviable offspring due to poisons accumulating from scavenging on sea mammals. The sea mammals contain contaminants including mercury PCBs and DDT metabolites. Yes, DDT has been banned in this country for many years, but it is still used in other countries plus it persists for a very long time after use, especially in marine environments. The EPA and other agencies must do better at analyzing and regulating the chemicals that we are all exposed to.

• Habitat degradation. Construction and urban development of rangeland are major offenders. Steps are being taken in the recovery program to train the birds to avoid power lines, which have been a significant source of mortality for released birds. For wild hatchlings, encasing lines in insulated tree wire improves visibility. Similar consideration must be given to wind energy facilities in the condors’ range.

• Microtrash (bottle caps, can tabs, bits of plastic, etc.) is often ingested by birds and fed to nestlings, which can lead to poisoning or blockage causing starvation. Let’s work toward eliminating plastic packaging and improving design and recycling of containers.