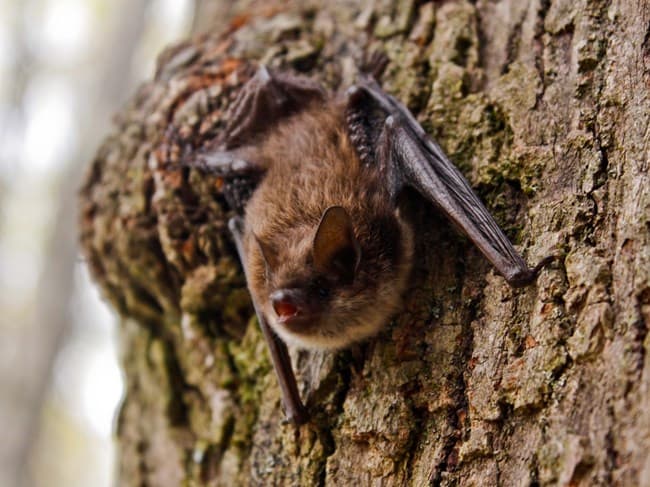 As summer takes hold, we see bats each evening feasting on insects under our deck overhang. As the light fades they cruise back and forth to capture insects that have lingered under the deck’s shady roof. Bats have always amazed me. These little brown bats (Myotis lucifugus) are small flying mammals that eat only insects—as many as one to two thousand per bat every night!

In the Pacific Northwest (PNW), most bats roost in big old trees and snags. This is their home and critical habitat for our local bats. Some do use wood piles and eaves with openings in them to stay warm and safe. Bats are not only threatened by loss of habitat due to logging, but also by use of pesticides. As insectivores they are exposed to insects that may have been sprayed but not yet killed, or they may not find the juicy bugs they need and prefer in their diet. Female bats nurse their young, and the little family is susceptible to disturbance as the young are unable to survive on their own. 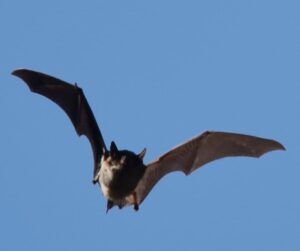 These small bats have a 9-inch wingspan and can fly between 12 and 21 miles per hour. They are the most common type of bat in the PNW, seen in all types of habitats, including towns. Bats have historically been maligned and persecuted by poorly informed humans. Healthy bats are actually harmless and non-aggressive. As a species, bats are the only mammal capable of true flight and are immensely important globally as pollinators and insectivores, helping our agricultural needs on both ends of the spectrum. Several other species of bats are found throughout the PNW, in some cases migrating to or from their preferred feeding sites.

Late in the summer we have seen bats flying in pairs, which appear to be mothers with their young flying close behind, learning the art of catching insects with their unique sensory radar. It is their superpower! We happily watch the bats catching insects, especially mosquitos, as we sit outside enjoying the summer evenings. To encourage more of them to live nearby, we installed a bat box on the back corner of our house, about 30 feet off the ground. At dusk we can see bats fly up to the box as if waiting to have those inside come out. Our hope is that the young ones will thrive and eat insects under our deck roof as well!

This summer, if you want to try to see bats, go out just before sunset. Look for lots of flying insects and pull up a chair. Many times ponds or slow-moving water are an attraction, but don’t forget your insect repellent.

Volunteers Are Needed, Appreciated, and Enjoy Their Involvement

Volunteers are the “green energy” that drives the activities of the Lane Audubon chapter. The…

Vaux’s Swifts (Chaetua vauxi) are small aerialist insectivore birds. They do not perch to rest,…